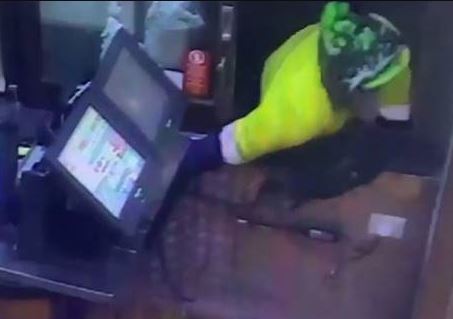 New footage has been released, as investigations into the alleged armed robbery of a Rockhampton fast food restaurant continue.

A spokesperson for Queensland Police says detectives have released CCTV of a suspect, following the incident just after midnight on November 9.

"The man, wearing high-visibility clothing, is alleged to have used a machete to smash his way into the business, on the corner of George and Fitzroy Streets, and steal the till," the spokesperson says.

"A dark coloured hatchback was also seen in the area around the time of the alleged robbery.

"Detectives believe the occupants of the car may be able to assist their investigation."

There are calls for anyone who recognises the suspect or vehicle to come forward.

If you have information for police, contact Policelink by providing information using the online suspicious activity form 24hrs per day at www.police.qld.gov.au/reporting.