Two charged after toddler dies in hot car - A Townsville mother has been charged over the death of her daughter after the toddler was allegedly left in a car for most of the day amid soaring tem ...
Historic Holden race car could fetch $1m - A 1977 Holden Torana driven by racing driver John Harvey in the 1970s is set to reap more than $1 million at auction.
Trio fired for Maradona open coffin photos - Three funeral workers have been fired for posing for photographs alongside the body of soccer star Diego Maradona shortly before his funeral.
Victoria marks unlikely virus-free status - Victoria has eliminated coronavirus, an achievement that was unthinkable only three months ago.
CQ smoking rate higher than state average - Fewer Central Queensland residents are reaching for a cigarette but the daily smoking rate is still higher than the Queensland average. The latest ...
SA to step back virus restrictions - South Australia has revised a range of COVID-19 restrictions, including opening the border with Victoria, after reporting no new cases linked to the w ...
Intercity train strike in NSW called off - The NSW Rail, Tram and Bus Union has called off a snap 24-hour strike after the state government cancelled test runs for its new intercity trains.
STAY INFORMED: Nerimbera (Rockhampton) bushfire - Bushfire warning level: ADVICEQueensland Fire and Emergency Services (QFES) advises there is a bushfire in Nerimbera.You need to keep up to date and ...
Possible croc-catching hook found near Rocky - Authorities are looking for information after a large homemade hook which could be used to catch a crocodile was found in waterways near Rockhampton ...
Assange's partner asks Trump to pardon him - Julian Assange's partner Stella Moris has tweeted US President Donald Trump on Thanksgiving, appealing to him to pardon the WikiLeaks founder. 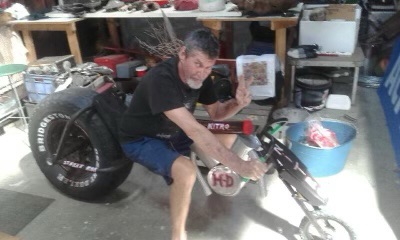 Chris ‘Pineapple’ Hooper could be Rockhampton Mayor within days after being formally offered the position.

Mr Hooper says he won’t be passing up the opportunity to be leader - even if it's just for a few days - saying he expects to be sworn in on Tuesday.

"As soon as I'm sworn in, they put me up in a big chair up the front, and I've got to chair the meeting, that's what a Mayor does," he tells us.

"It looks like I might have to learn that sort of stuff, but there's a lot of people who think the Mayor can just do what they want and it's just going to go through, but that's not necessarily the show."
The Electoral Commission Queensland has confirmed it has written to Mr Hooper offering him the position in what is a strange turn of events following the resignation of Margaret Strelow.
Ms Strelow stood down on November 9 after she was found guilty of misconduct. She vehemently denies any wrongdoing.

The ECQ has to legally offer the role to the climate change activist under recently changed state laws, paving the way for him to become Mayor by default.

The State Government is working to overturn the legislation when Parliament sits on December 1.

But the ECQ says until amendments are made, the current law applies.

It means the position must be filled within two months, and a vacancy notice must be sent to the runner-up offering them the position.

"It's backfired on them, they've got to get rid of me because I don't fit into the mold of what they're talking about," Mr Hooper says.

The LNP is hitting out at Labor, describing the whole situation as an embarassing debacle.

“Labor’s electoral laws should never have been introduced and were delivering farcical outcomes for Queensland,’’ Ms Leahy says.

“I have nothing against Chris, but as an ‘accidental’ mayor he is the victim of Labor’s manipulation of the system, as are the people of Rockhampton who deserve certainty about their region’s leadership.

“The election reforms could have seen a mayor elected with just one vote – all they needed to do was come second in a two-horse race’’.