UN warns on home violence due to lockdowns - With more than 1.2 million people infected with the coronavirus, the UN chief has appealed for "peace at home" out of concern domestic viole ...
Boris Johnson expected back at Number 10 - Prime Minister Boris Johnson is "doing well" and is expected to be back at his office shortly, housing minister Robert Jenrick says after th ...
Rise in asymptomatic virus cases in China - China has reported 39 new coronavirus cases, up from 30 a day earlier, and the number of asymptomatic cases has also surged, as Beijing continues to s ...
Five virus cases in Tas hospital outbreak - Tasmania is probing an outbreak of coronavirus in the state's northwest, with five cases linked to one hospital.
Mystery Qld cases spark extra virus tests - Extra testing for COVID-19 will be rolled out in parts of Queensland due to 32 cases whose sources remain unaccounted for.
Newitt holds fears for Tasmanian racing - Leading jockey Craig Newitt fears for the future of the Tasmanian racing industry following its shutdown by the government in a bid to stop the spread ...
Warning on early access to super scam - Scammers are pretending to offer people financial relief from the impacts of the coronavirus pandemic by helping them access superannuation early.
NSW COVID-19 death toll rises to 18 - NSW's COVID-19 death toll has climbed to 18 following the death of two elderly men in Sydney, as the state's number of confirmed cases tops 2600.
Latest snapshot of the coronavirus impact - LATEST NEWS ABOUT COVID-19:--NUMBERS* Confirmed cases in Australia: 5692* Australian deaths: 38 (18 in NSW, eight in Vic, five in Qld, three in WA, tw ...
States discuss plight of year 12 students - Education ministers are looking at every trick in the book to ensure year 12 students finish school this year despite the mayhem caused by coronavirus ... 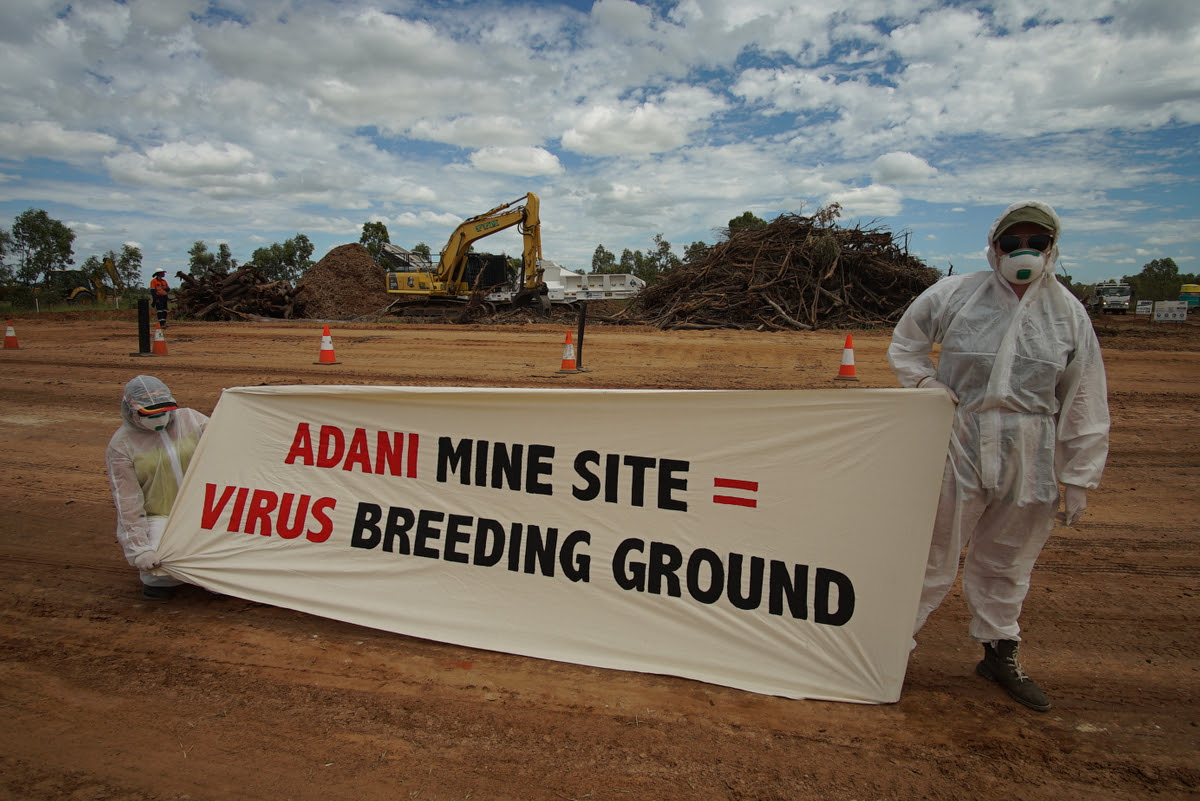 Activists at the entrance to the Carmichael mine site.  Image Credit: Frontline Action on Coal

Adani has criticised protestors who turned up at the Carmichael Coal Mine site on Sunday.

An Adani spokesperson said “We are continuing to follow all relevant advice from Queensland Health and the Federal Government on COVID-19 in order to keep our people, contractors and the community safe and protected".

“We are disappointed that anti-fossil fuel activists are currently at our Carmichael mine site in Central Queensland [on Sunday] attempting to politicise such a serious situation.

“This is not a time for point scoring or posturing.

Activists at the entrance to the Carmichael mine site.  Image Credit: Adani

“Our operations are continuing in line with the current recommendations and with the best interests of regional Queenslanders in mind.

“We will continue to make changes to our procedures and operations in line with the latest advice.” 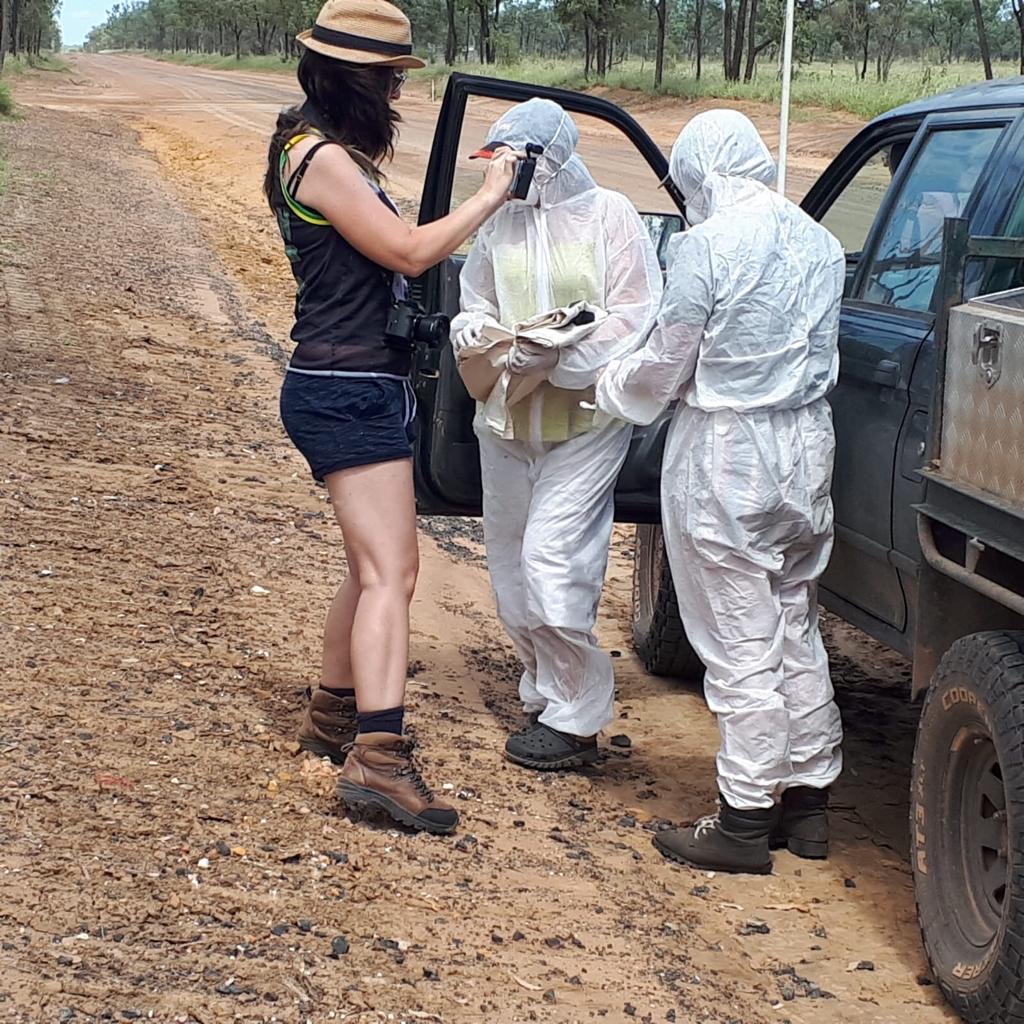 Activists at the entrance to the Carmichael mine site.  Image Credit: Adani

Frontline Action on Coal responded saying; on Sunday morning, concerned members of the public observed the Adani Carmichael mine site operating at full-swing, during a time when Australian states are closing their borders, with many states advocating for only supermarkets and pharmacies to be open.

Members of the public stated that they found the decision of Adani Australia to continue their operations amidst a global pandemic to be "risking the health and safety of employees as well as the local community".

FAC said, "Adani Australia employees and contractors travel hundreds of kilometres from around the country to get to the Carmichael site. Adani's decision to continue operations has the potential to put remote and vulnerable communities as well as fellow workers in Central QLD at risk, with the spreading of COVID-19 a likely outcome".

"Concerned citizens, who witnessed these operations, have stated that Adani were not following appropriate protocol. They noted that Adani employees were coming within two metres of them on a public road, even after they asked them to keep their distance.

Frontline Action on Coal spokesperson Amy Booth states, "Camp Binbee has made the appropriate decision to encourage its supporters to engage in physical distancing, which includes not travelling to Camp Binbee. For Adani to continue encouraging it's employees and contractors to travel great distances, in a region where COVID-19 is not yet prevalent, is dangerous, unsafe and is far from the necessary physical distancing which health officials are urging people to do."